On Saturday I was up early and dressed in my running kit as usual, but instead of heading out to run for an hour or two, I jumped in the car. Two hours later, I was in Aldbury, pulling into the ‘Industrial Park’ that is Ashmei HQ. I don’t think I’ve ever seen such a bucolic office location. The farmyard and agricultural outbuildings had all been converted into offices for a couple of small businesses.

The gleaming Airstream trailer told me I had arrived at the right place. 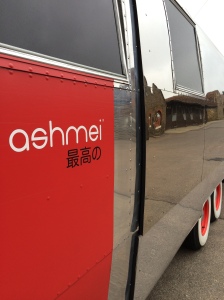 A couple of weeks ago I had seen a Facebook post about the role of Brand Ambassador and applied, and was surprised when a few days later I received an invite to the Ashmei Ambassador day. I was anticipating meeting a couple of dozen enthusiastic runners all competing for the role, before going for a run. I’d done some research, and seen a blog from one of last years candidates. They had all been asked to prepare a 1-minute talk for video on their goals, so I was expecting something similar or worse, and some fierce competition.

Instead, we were all welcomed with a drink and some pastries and I enjoyed a few minutes meeting the other candidates, and having a few photographs taken. There were a range of ages, and abilities, but they all had a huge enthusiasm for running, cycling or tri: be it short course races or Ultra distance. No massive egos on display or any competitiveness, just a great bunch of people chatting about running and cycling.

We weren’t set any tasks or challenges, and instead we enjoyed a brief presentation from Simon Freeman of Freestack about the ambassador program, before an overview of the Ashmei brand from Stuart Brooke. Stuart is the founder, owner, and designer and clearly passionate about creating high-performance quality sportswear.

I’ve used merino wool clothing for years as a base layer when skiing, so I had tried Ashmei in 2011, not sure if merino would work for running. It does. I’ve worn my Ashmei top on many runs and used it for both my 100 mile races. It was perfect in the first race (NDW100 in 2012) but couldn’t handle the more humid conditions on the SDW100 in 2014. Mind you nothing coped well that day. I swapped from Ashmei to a more traditional technical top after 35 miles, and then had to change again at the half way point, as I was soaked in sweat. I’ve been meaning to try the newer merino + carbon range to see how much better this is, but haven’t got round to it yet. In fact, I had turned up for the ambassador day wearing my original Ashmei jersey. Too creepy?

After the presentation, we were all given a pair of new socks to try and invited to join them for a run or ride. I’m not sure how it worked for the cyclists, but for the runners this gave us another opportunity to chat as we ran up a few trails, posing for selfies and group photos before gatecrashing the Ashridge Boundary Run (a 16 mile race taking place that day).

Once back at the Ashmei office there was just time for more cake before heading home. Now it seems the competition has started in earnest, and it’s not on the trail. Instead it’s all happening here on social networks: at least half a dozen blogs, a YouTube video, Instagram stills and video (that’s me on the left – thanks Matt!), and more #ashmeiambassadors tweets that your average marathon.

These runners all know how to create buzz and PR for a brand, so Ashmei should do well with their 2015 Ambassador program who ever they chose! I just hope to be part of it, and even if I’m not, I really enjoyed my morning.

This entry was posted in Running and tagged Ashmei. Bookmark the permalink.

One response to “A Social Race”