The alps are beautiful (my photos don’t come close to capturing them), so after giving myself a bit of a slap I decided to make the best of the day, try and enjoy the beauty around me and get back to Chamonix in time for breakfast. I don’t remember much of the final climb – it was very much head down, one foot in front of the other. However I’ll never forget the descent. It was so steep that the race organisers had attached ropes for runners to grasp in case they slipped!

Watching people struggle down the slope it became apparent who had mountain running experience: the local French runners skipped down, the rest of us bum-shuffled from rock to rock, while gripping the ropes in fear. Eventually the slope began to level out, get less rocky and the pace picked up. Finally after about 4 hours I was running on a trail through the mountains and beginning to enjoy myself again. The next checkpoint, Cormet de Roseland, had my drop bag, and was serving hot food. Once again I sat down and forced my self to eat (pasta, soup and cheese) and drink. Although it was still daylight i knew it would be dark soon, so I put on my head torch, a gilet to keep me warm, and set off. There was now only 30 miles to the finish!

The first couple of miles were uphill, so I was happy to walk as I had eaten well, but soon the path changed to some muddier sections and some downhill running. There were a lot of cows grazing in the pastures and the cheerful cow bells kept me amused as i ran along the narrow trails following a small group of runners. One by one we turned on our head torches, and picked our way down the valley. I heard the roar of rushing water before I saw the marshalls. They were urging us to stick to the left as we ran down the trail into the gorge, and I soon realised there was a significant drop on the right down the river. I’d seen video of this section [ http://dai.ly/xt61ji ], and it had looked terrifying, so I was almost glad not to be able to see it in the darkness.
I was well behind my race schedule, so at the next checkpoint (La Gitte) I phoned Sarah to reassure her that I was fine, and still trying to finish. I had hoped to finish early in the morning, but was now targetting a more sociable 7 – 8am finish. The children wished me a cheery ‘good night’, and I promised to call again from Les Houches to give them early warning of my finish. Then I set off on the next leg to Col du Joly.
I was finally working with a steady rhythm: hike up, run down; eat and drink regularly; even stopping to pee. My trail mix of almonds, dried mulberries and chocolate coated coffee beans was going down well, and I could enjoy the moonlit mountains. The string of head torches leading the way up the various climbs helped add perspective whenever I looked up from the small section of trail under my feet. There were a number of now familiar faces around me. Two or three people who would power past me on the steep climbs, but I would then catch and pass on the easier runs. At Col du Joly, i stopped and enjoyed a cup of tea. The sweet warm drink was a real pick up and felt better than I had at any point in the race. I heard a couple of english voices on the trail. Two guys were running together and one clearly knew the route well. He warned me there were still three climbs after Les Contamines – “a complete killer and two cheeky little numbers”.
There was some confusion near Les Contamines. I followed the excellent trail markers, but suddenly saw a couple of dozen head torches running towards me. Someone explained we were on the wrong trail, and now on the UTMB route. In fact this was wrong. One of the French runners placed a quick call to race direction and confirmed we were in the right place. The organisers had used some blue ‘Columbia’ tape in addition to the red and white markers, and that had caused the confusion. So we carried on, now in a large pack of 20 or so runners. This was perfect for me as the battery on my head torch was fading fast and I could simply follow along before changing the battery in the comfortable and well lit aid station. After another tea i was on my way again.
The first climb seemed to pass quickly, but sadly this was not the “killer” just the first ‘cheeky’ climb. The ascent to Col de Tricot looks innocuous enough on the route map, but was hard work, and it was with relief that i reached the top and ran down towards Bellevue. The sky was slowly brightening, and I could see the lights of Les Houches in the distance as i wound my way down through the woods. The tree roots made this tough on tired legs, but the red glow to the clouds and thought that I was now near the end made this section almost pleasant. I walked through the village, as I took my phone out and called Sarah to tell her I’d be finished in just under and hour. She would wake the children and bring them to the finish line.
I’d run the section from Les Houches earlier in the week, so knew the trail, but every little incline seemed like a mountain now. However I was determined to run as much as possible now, and was rewarded by huge smiles and cheers from every person I saw out for their early morning run. A few looked like they were UTMB runners out for a final run before their big day in the mountains. Although it was only a little after 7am as I ran into Chamonix, there were plenty of people about and every one waved, applauded and encouraged me. The whole town embraces the race in an amazing way and it makes for a fantastic atmosphere. Race marshalls stopped the traffic for me as I ran over the roundabout and onto the pedestrian only Rue du Dr Paccard. As I got to the Post Office I saw Sarah, and then suddenly the children ran out to join me and and run with me up the Place de l’Eglise to the finish arch.
As a runner I had a bad race. Poor planning before the race and decisions early on led to dehydration, and i seriously considered dropping at one point. However with no broken limbs as an excuse i carried on. Eventually i resolved to forget about the ‘race’ and enjoy the experience, and I can now reflect on one of the most amazing days (and nights) I have ever had.
To summarise my TDS experience: A poor race but a great day in the mountains.

From hills to mountains

At the end of last year I decided to focus my goals on hills and mountains and not just chasing PBs. I ran the Brecon Beacons Ultra and really enjoyed it, and then entered the TDS (Sur les Traces des Ducs de Savoie). I was checking the UTMB website from 9am to check the results of the lottery draw, and when I finally managed to get the search page to work, I saw the good news that my application was confirmed. TDS is one of the five Ultra Trail du Mont-Blanc races. The race is about 74 miles long with 24,000 ft of elevation gain over technically difficult terrain. I knew it would be tough when I entered, but now my place is confirmed, I’m starting to plan my training.

I’m not too concerned about the distance, but nothing I have run so far compares to the elevation profile for this race. My training log shows last year I averaged 9,700 ft of elevation gain per month, with a highest figure of 16,900 ft in June (11,400 of which was the South Downs Way). TDS is more than twice that with 24,000ft of climbing. 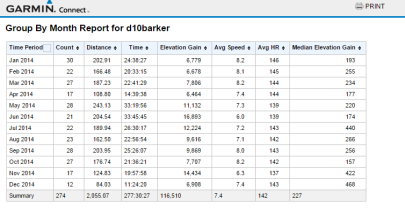 If I am to stand a chance of coping with that amount of climbing (and an equal amount of quad trashing descents), I need to be running up and down a lot more hills. I’ve no idea where I will find them, or what sort of hill sessions I’ll run yet. That may wait for another blog.

I think if I can achieve this I will be strong enough to cope, and more importantly, I will have the confidence to believe I can finish.

There is still plenty of time to work out a plan to peak in August, but for now I’ll try to remember to take the hilly option when I head out of the door. So no more flat runs along St John’s Road, Mt Ephraim and Langton Road to the Hare and back.